Alright, enough time has passed. We need to talk about EL CAMINO.

And we’re not even talking about Jesse Plemons’ inexplicably obese return as Todd Alquist. Heck, if he was female, they would have made it contractual that he was a certain weight. For an IP so known for verisimilitude and consistency, allowing Plemons to put on 50 pounds is inexcusable and takes you immediately out of the story.

But no, we’re talking about the script. It always comes down to the script.

Hey, look, we worship at the altar of Vince Gilligan over here. The 60 episodes of BREAKING BAD he oversaw were some of the finest television ever made, full stop. But there, except for the brilliant pilot of course, he had a writer’s room.

The problems with the EL CAMINO script are many. Subtract the flashbacks, and there’s practically no story.

In a nutshell, here’s the story, minus flashbacks: 1) Jesse holes up with Badger and Skinny Pete, who help him out.
2) Jesse goes to Todd’s apartment and tears the place apart looking for Todd’s stash of money.
3) Two fake cops steal the money, but Jesse convinces one of them to give him a third of it.
4) Jesse goes to Robert Forster’s vacuum shop to get disappeared — but he’s $1800 short.
5) Jesse fakes out his parents into leaving the house, then raids the safe where he finds two guns.
6) Jesse tracks down the fake cops, there’s a Wild West-style shootout, and Jesse out-thinks his opponents.
7) Robert Forster brings Jesse to Alaska.

Does that sound like enough plot for a movie?

Now to be fair, yes, some of the flashbacks were relevant to the plot — in an expository way. Jesse knows how to find Todd’s apartment because in a protracted flashback sequence taking up probably over 30 minutes of screen time, Fat Todd brings Jesse back to his place to help him dispose of a body. And because all the bad guys from BREAKING BAD were killed in the finale, Gilligan invents new ones — the fake cops — then connects them back to Jesse by making them the metalworkers who installed the tether system restraining Jesse at Uncle Jack’s compound.

Coincidence? Yes, it is. 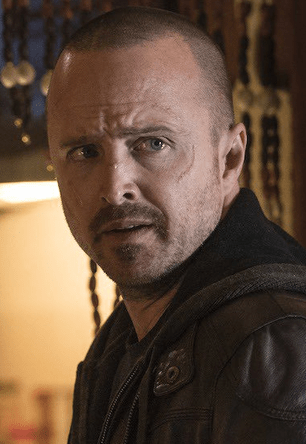 On top of that, the plot events themselves are unsurprising and startlingly lacking in the trademark BB turnarounds and tension. Everything plays out exactly as you’d expect. Even the banter with Badger and Skinny Pete felt oddly lifeless. Jesse, as haunted and tormented as he is, feels… well, flat.

It’s all frankly a bit boring.

So to disguise that and pad out the run time and of course reward the fans (nothing wrong with that,) we have little nostalgic flashbacks with Mike, Jane and Walt, all of which were unnecessary and did not affect the story at all. Meaning they could have been cut. Some of them even subtly undermine the carefully constructed tapestry that was the brilliant plot of BREAKING BAD, like Walter not remembering that Jesse graduated high school, and Mike being the one to suggest hightailing it to Alaska — even though Aaron Paul’s performance in the series is clearly one of a man who spontaneously came up with the idea, not one who had been fed that idea previously. Ugh.

To say EL CAMINO was the worst “Breaking Bad” isn’t fair, because there was no bad “Breaking Bad” until EL CAMINO. But it was certainly a big disappointment that actually somewhat undermines the series it means to honor.

We still love ya, Vince, but next time, please get some feedback on the script.

What did you guys think? Do you agree? Disagree? Hit us with your opinions!