Aspiring dramatic TV writers take note: MasterClass‘s latest comprehensive video tutorial features acclaimed television writer Shonda Rhimes, the creator of shows such as Grey’s Anatomy, Private Practice, and Scandal. She is also known for having written screenplays for a number of movies earlier in her career and has been the showrunner of countless TV shows. If you’re trying to break in to TV writing, this seems like a no-brainer. But is it worth the $90 and 6+ hours?

A self-proclaimed worshipper of Aaron Sorkin (see our review of his MasterClass right here), Shonda sits back and allows her students to get an intimate glimpse into her own world, “ShondaLand,” if you will. And she is surprisingly honest, thorough, and down-to-Earth.

After having gone to USC film school, studied film and TV extensively, written a number of movies, and picked apart Aaron Sorkin’s The West Wing pilot, Shonda approached ABC with her own pilot about a group of female war correspondents who worked and partied a little too hard.

A fun fact I learned about TV shows is that they are surprisingly similar to comic books. If you’ve ever studied the rise and fall of comic books, you’d know that in periods when the country is faced with war or poverty, people cling to stories of hope. In times when the state of the country is optimistic, people’s need for the dark and twisted anti-hero shines through.

Given that the US was in a war when Shonda approached ABC with a war correspondents pilot, it was shot down — yes, pun intended — by studio executives. That story was then re-imagined as a story of female surgery interns meets Sex And The City — eventually called Grey’s Anatomy.

Shonda provides scripts and story bibles for two of her pilots, Grey’s Anatomy and Scandal. She walks you through a breakdown of the pilot of Grey’s Anatomy. Yes, each act of the pilot gets its own separate segment. To top it off, there are four surrogate students in the room who ask her questions and pick her brain to trace the story’s genesis. 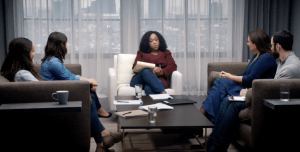 After this breakdown, in which she explains her A, B, and C storylines and how they intertwine in her writing, she then allows the same team of students to break down and white board the pilot of Scandal — five columns, with each storyline color-coded.

Interestingly, scripts in ShondaLand change constantly. They appear to change mostly after readings. Shonda reads while she writes, but she wears noise-cancelling headphones — which she equates to Pavlov’s bell. In essence, she responds to the energy of a piece as it comes to life, and not to the individual words. She reads out loud while writing, has writer table readings, then actor table readings, and is done.

To be honest, I learned a good deal from this MasterClass. At times, though, there were segments (of the 30 video lessons) that I felt were extraneous.

What it’s like to be a showrunner, how to deal with network executives, and how to decide if you’ll hire an actor seemed beyond the scope of this class. I’m sure it was valuable to people closer to signing their own deals, but it felt like it took the student out of the world of writing and into the business side of the world. Of course it’s important to have business-savvy, but the truth is that many of the folks watching this series may not ever get those opportunities, and by the time you’re there, you’ll likely have plenty of people to consult with such as your agent, manager, producer or network executive.

The segment on how to pick a name felt like it really didn’t belong, especially since Shonda didn’t really have a method for picking names. Names apparently stand out to her over time, which is, what I think happens to most people. If that time were used to give the student a more nuanced understanding of story world or dialogue, I felt like it would have been better spent.

I had mixed feelings on the segment on what it’s like to be a bad-ass. It is wonderful to have an accomplished female minority tell you that you have the ability to be a bad-ass, but this is more evident by her persona and her accomplishments as a writer and showrunner. I didn’t really feel like it needed its own segment, but I do applaud her for telling her students that they “belong in any room in which [they] enter”.

Definitely worth the time and money. Do yourself a favor and watch this class, even if you’re planning on writing a movie instead of TV. Shonda Rhimes is well worth the investment. 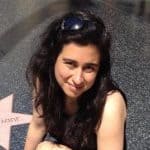 is a published short story author and an aspiring screenwriter. She has a love of sci-fi, fantasy, and maybe a little poetry.

Coverage, Ink has no affiliation with MasterClass.