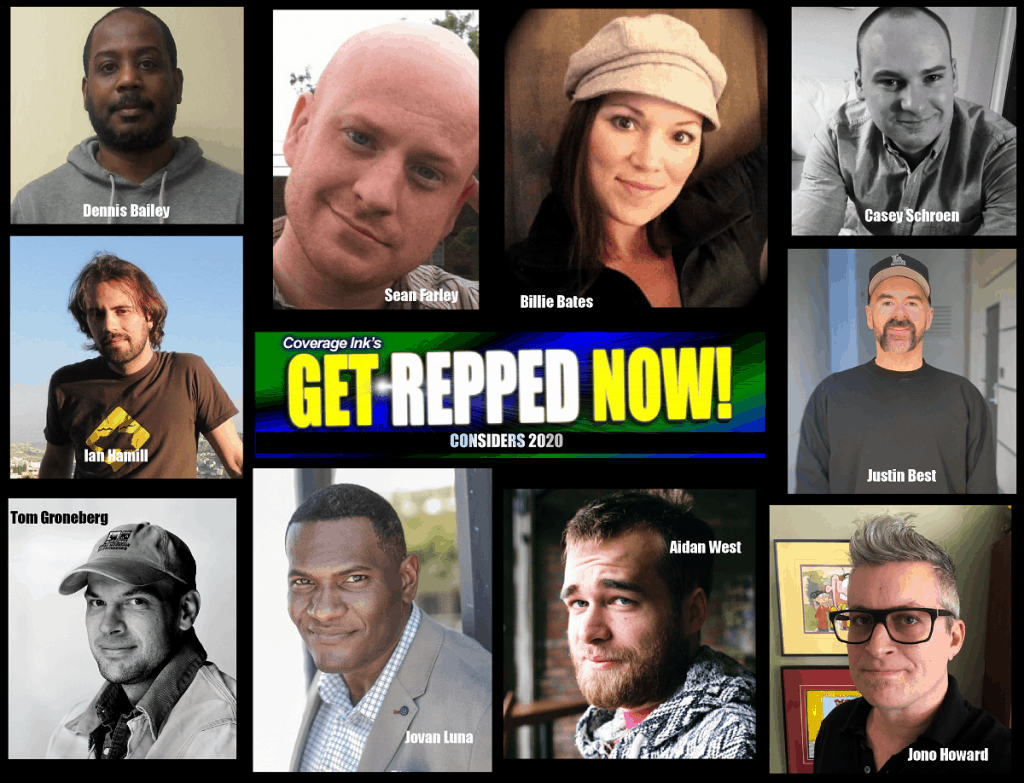 We are proud to present the Get Repped Now 2019/2020 considers! These 12 writers have what it takes and submitted screenplays or pilots so effective that they scored a coveted CONSIDER rating for script from CI. This means that the work is in great shape and worth the industry’s time. Unlike some companies, CI provides only REAL WORLD analyses — when you get a consider from CI, you know it’s the real deal.

Check out the loglines below, and let’s all pull for these writers as they storm Hollywood’s battlements. Congrats to our amazing CONSIDERS!

1) DARRYN THE BOLD AND THE SWORD OF BOLDNESS by Justin Best (comedy)
Logline: An arrogant, hard-partying former hero is tracked down by his sharp-witted, long-lost daughter, who convinces him to help her find a legendary weapon to defeat a heinous, female barbarian conqueror.
Contact: justinmbest (at) gmail dot com

3) DAMAGED by James Lakas (crime thriller).
Logline: An ex-cop has to pull a gangland hit for her crooked former partner in order to save her captive daughter.
Contact: lakemonster2000 (at) juno dot com

5) PENTHOUSE B by Casey Schroen (thriller).
Logline: On a stay in New York City, a couple is framed for murder by a sinister, fortune-seeking AirBnB renter.
Contact: schroelc (at) gmail dot com

6) POUND FOR POUND by Dennis Bailey (sports drama).
Logline: A boxing champion has to battle his inner demons, his criminal past, and his own father as he prepares for the biggest fight of his life.
Contact: baileyenterprise11 (at) gmail dot com

7) THE EMPTY QUARTER by Tom Groneberg (drama).
Logline: A young man longs to become a tribal warrior like those from days of old — but the challenges of modern life on the reservation, his family dynamic, and an unclear future all get in his way.
Contact: tomgroneberg (at) gmail dot com

8) ZERO by Jono Howard (sci-fi dramedy).
Logline: A clone seeking the truth about his origin leads an army of exact replicas in a bloody revolt against the government jailers holding them in a remote desert camp.
Contact: jono6 (at) shaw dot ca

1) FI$H by Ian Hamill (1-hr drama.)
Logline: A frustrated loser in the Florida Keys, who makes his meager living capturing and selling tropical fish, gets involved with gangsters when he promises to net them a rare shark.
Contact: ian.hamill (at) gmail dot com

2) MERCHANDISE by Jovan Luna (1-hr drama.)
Logline: When a black belt African-American college student’s sister is kidnapped by a human trafficking ring, she teams with her recently deceased dad’s old army buddy to get her back.
Contact: jovan (at) jovanluna dot com