Last year’s GET REPPED NOW saw us read over 600 pilot and feature scripts, and 13 were awarded the coveted “consider” for script (around top 4%.)

While many of those scripts got the writers meetings with our reps, alas, it doesn’t always work out, for various reasons. The most common: the rep has recently seen, or shopped, a similar piece of material. But these three writers went on to have their careers elevated in a significant way, and as they say, the best is yet to come.

SOPHIE MCLACHLAN-O’HARA’S half-hour comedy pilot THE PRINCESS OF SWEETS demonstrated a quirky, British, and above all, funny writing voice that got her immediate attention — so much so that she actually had multiple offers to represent her (a remarkable situation indeed.) We had a few late additions to our manager/agent panel last year (we wound up with 13 managers and two agents total,) and our contact Fourth Wall Management immediately sparked to the pilot. In the meantime, Sophie had gotten interest from other places. Ultimately, she decided to go with Bella Bagatelos and Claire Jennings from Fourth Wall, the ones who were most passionate about her from the start. Well done, Sophie! 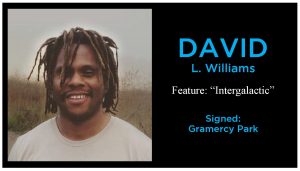 DAVID L. WILLIAMS’ thoughtful and clever sci-fi drama INTERGALACTIC also grabbed a lot of attention right out of the gate. Several of our managers sparked to the script, as well as our agent panelist Halle Mariner from APA. In the meantime, David was getting a lot of heat from his other scripts too, including scoring a rare “9” on Blacklist and being one of the most downloaded scripts of the week. It’s SO cool when all the heat coalesces! David was able to parlay all of that interest and, with a little help from fan Joey Tuccio from Roadmap Writers, got the script to still more reps. Before long he was getting offers from multiple places. He ultimately decided to go with Scott Halle and  Mitch Bendersky from Gramercy Park. But the story doesn’t end there, as APA is still in the picture; Mariner has attached a director, and they are packaging the project now!

“The Coverage, Ink “CONSIDER” led to a meeting with an agent who introduced me to (a director client). That director is now officially attached. We’re going to make a few changes to the ending, and then he and Halle will get it out there for financing/packaging (with the aid of my manager). So… thank you again, massively. ”  — David L. Williams 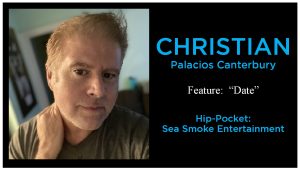 CHRISTIAN PALACIOS CANTERBURY’s feature horror script DATE had one hell of a hook. We knew it was a winner from jump. We slipped it to our panelists, and manager/producer Josh Weinstock from Sea Smoke Entertainment really responded. In fact, Josh liked quite a few of our considers and had phone/Zoom meetings with five of the writers. But it was DATE that stood out for him. Right now he’s working with Christian on developing the script with an eye towards attaching a killer director and taking it out as a feature spec.

But the saga doesn’t and there. This is all just “so far”. For all three writers, as well as our other considers, this is just a step in the journey. And even for the writers who did not hook up with a rep on this one, new relationships were formed. We’re excited to see where it all goes.

Congrats to Sophie, David and Christian!