You committed to the process. You accepted the Challenge. And by the end of April, you should have a brand-new piece of material to show for it.

Let’s get this party started.

Week One: Outline and Character Bios 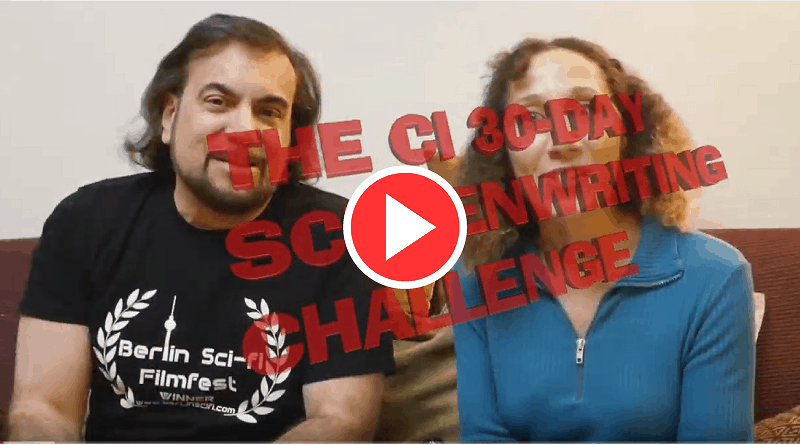 FEATURES: Your goal is to have an outline done by the end of week one (April 7th). This outline should have enough depth that you know all the main beats, possibly some partial scenes. We

highly recommend using the Save the Cat! beat sheet.  Of course there are plenty of alternative structures, and they’re all well and good — whatever is best for your story. We like Save the Cat! because it really does prevent one from going too far off the rails. You know you have to hit the inciting incident no later than page 15, the break into two no later than page 30, and so on. As well, it’s the predominant structure in contemporary Hollywood movies and even most indies. No need to reinvent the wheel.

You should also aim to have detailed character bios for your main characters – think about who these people are, their backstories, peccadilloes, socio/economic status, significant life events, tragedies, successes, strengths, flaws, quirks, neuroses, medical issues, dramatic flaw, politics, education, personality type, and most importantly: main want. The better you know your characters, the easier it will be to write them, and the more character-specific their dialogue will be.

Don’t forget THEME. WHY are you telling this story? What is it really saying — what’s the takeaway? Show us what your story is about, what it’s trying to say through the protagonist’s experience and through what they need to learn.

One last tip as you’re plotting your screenplay structure. Remember that there is nothing readers and execs like more than

a good surprise. The best way to do that is to hit ’em with the unexpected. Make unconventional story choices. Understand the form and tropes of whatever genre you’re writing and then go the opposite direction. This will delight readers and show them you’ve got the goods.

For example, in the Coverage Ink Films animated horror movie To Your Last Death, we were keenly aware of all the cliches associated with slasher and psychological horror films. So we deliberately leaned into those tropes to make people think we were going to indulge them. Then we pulled the rug out from under viewers with surprising plot twists.

TV: Much of the above still applies. Whether you are writing a 4, 5 or 6-act script (regardless of whether or not you use act breaks on the page,) aim to have your outline done by end of week one, along with character bios. If you have an overall idea for the series direction, write that down, too. That will inform your long-term storytelling and can eventually become the bible (which you do not need yet — but you do need to have an overview of where your whole first season is going. Figure out your act breaks in advance as well, and make sure you end acts on either a cliffhanger or an emotional high point or a plot twist.

It is crucial that you employ an A-B-C or A-B-C-D structure — that means “A” story belongs to the protagonist, and then we have at least two subplots which go to the ensemble. TV shows are mostly ensembles — they rarely are “A” story only. That’s for features. If your pilot follows a single storyline from beginning to end, that’s called a “movie.” By all means, keep the focus on the protagonist, but use the subplots to flesh out the secondary characters as well as to shed light on the protagonist. 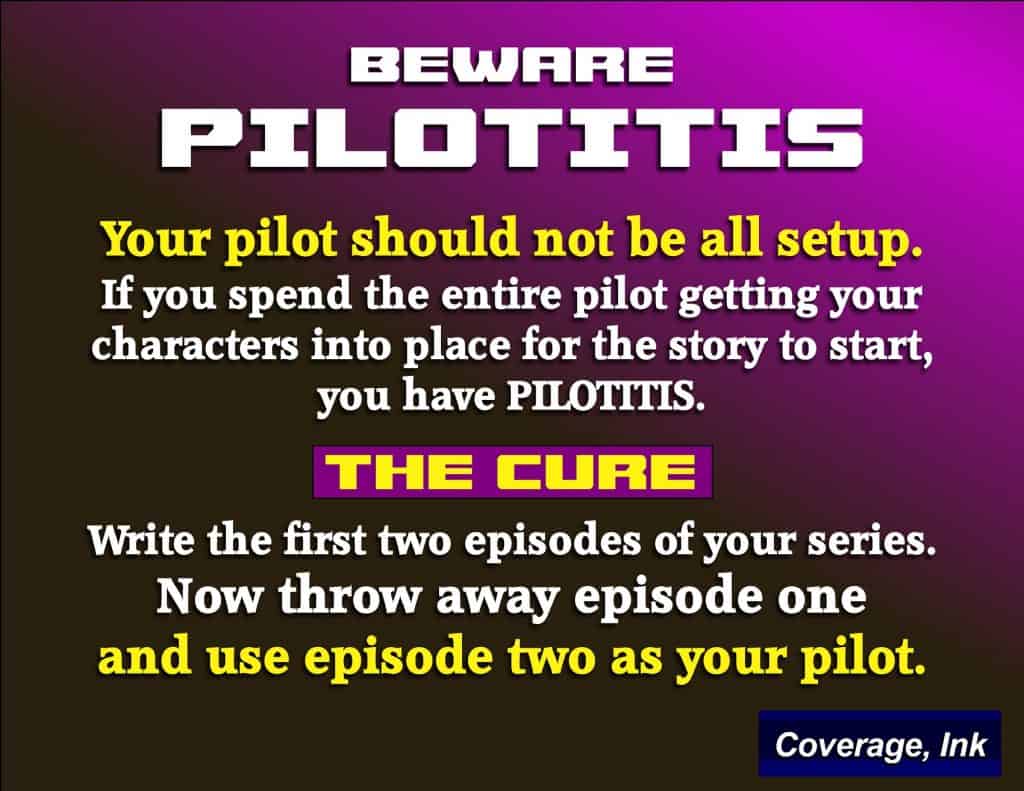 ide of that is if your show is a TRUE ensemble — in other words, you have a lot of characters, and each character and subplot gets the same amount of screen time — let’s say a few minutes each — that’s also a fail, at least as far as specs are concerned. We need a star role. Sure, “Game of Thrones” got away with this, but you cannot. Here’s a good metric to follow:

Important: It’s best to avoid PREMISE PILOTS (AKA an origin story, AKA ‘pilotitis.’) Of course you can have some origin in there, but if it goes on past Act 1, it’s a tough sell as a spec. You must demonstrate the series engine in your pilot, which means: it must represent a typical episode — in other words, show us what we’re going to get week after week. Origin stories do not do that. Look to the BREAKING BAD pilot for a great balance between origin/setup and typical episode.

Finally, act breaks are not necessary for 1-hr pilots — provided you are aiming at streaming. If you think the show could work for network or basic cable, make sure to include act breaks. In other words, you have a lot more possible places that can make your show if you include them; plus it demonstrates that you can write the form. 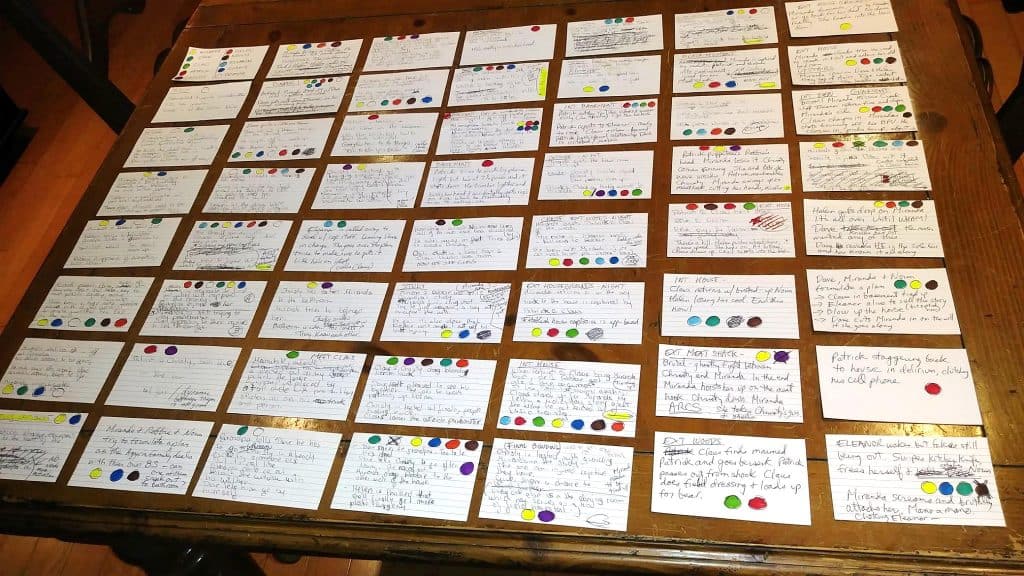 Breaking down your story on color-coded cards can be super helpful for seeing the big picture at a glance.

Back with more tips and guidelines in WEEK 2.